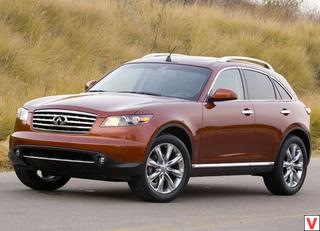 The Infiniti QX70 (formerly called the Infiniti FX until 2013) is a compact luxury SUV produced by the Nissan-owned Infiniti luxury vehicle brand between the 2003-2017 model year. The FX replaced the QX4 as Infiniti’s m >[2] The similarly sized Nissan Murano is based on the same D platform as the front-wheel drive Nissan Altima. The FX does not have Nissan-branded equivalent, and is not sold in Japan.

The FX introduced its second generation for the 2009 model year as the FX35 and FX50.

The nameplates FX35 and FX45 refer to the two available engines. The FX35 is available in two drivetrains, the RWD and the AWD, which are both fitted to a dual overhead cam 3.5-liter 24-valve V6 VQ35DE gasoline engine, with aluminum-alloy block and heads, electronically controlled throttle system, and low-friction molybdenum-coated pistons that makes use of the continuous variable valve timing which in part optimizes the opening of intake valves. This is also coupled with an electronically controlled super-wide ratio five-speed automatic with a manumatic shift mode that includes the option of sequentially selected manual gearshifts and downshift rev matching.

In September 2004 for the 2005 model year, the FX range received enhancements such as lane departure warning (LDW) system that helps alert drivers to an unintended movement of the vehicle out of a designated traffic lane. Infiniti’s system monitored the lane markings to alert passengers via an audible buzzer that the driver is drifting unintentionally. The LDW system, which utilize a small camera, speed sensor, an indicator and an audible warning buzzer, was offered on models. The Infiniti FX was the first passenger vehicle to offer a lane departure warning system in the United States market [ citation needed ] . In addition to LDW, the 2005 Infiniti FX range was now equipped with standard roof-mounted curtain supplemental curtain air bags with rollover protection for front and rear outboard seat occupants.

The exterior retained some of the first generation’s "Bionic Cheetah" look and "giant scarab" profile, while incorporating new styling cues. Features of the new design included longer, shark-like sculpted headlights, a large trapezoidal grille filled with horizontal dark-chrome waves, and functional side air vents. The overall size and dimensions of the new model, both external and internal, remained similar to the previous model.

The interior was completely redesigned to bring the FX up to the level of luxury found ins >[17] Features included stitched leather seats, stained maple wood or piano black finishes, and matte-finish surfaces.

Front suspension was a new double-wishbone design, similar to that found on the G37 and EX35; this replaced the previous generation FX’s front strut-type suspension. The suspension’s upper and lower A-arms were designed to improve control of a wheel’s motion, especially when the suspension compresses and extends, prov >[18]

A Europe-specific FX37 was unveiled at the 2008 Paris Motor Show, and went on sale in Europe in October, 2008 with the VQ37VHR. Europeans get the 325-hp FX37 as their entry level model instead of the FX35, which will be available in FX37 GT and FX37S versions. The FX37 GT came equipped with 20-inch alloy wheels, power and heated/ventilated front seats, adaptive xenon headlamps, parking camera sensors, all-wheel-drive, and a 7-speed automatic with paddle shifting. The FX37S added 21-inch alloy wheels, Continuous Damping Control, and sports seats.

A Europe-specific FX30d was released in late 2010, powered by a new 3.0-liter V6 turbodiesel V9X Engine. The engine was developed by the Renault-Nissan Alliance, and will also power the EX and M models.

This engine, which is the first diesel in Infiniti’s history, was specifically designed to deliver high levels of refined performance in line with Infiniti philosophy. Although a V8 diesel engine was entertained, the V6 format was selected early on as the ideal layout for the unit, providing the optimum balance between overall performance and refinement.

Options include Infiniti’s Hard Drive Navigation with touch screen and 3D building images, All-Around View Monitor (first introduced on the Infiniti EX) which displays a virtual bird’s-eye view of the vehicle and surroundings to aide in parking, and Intelligent Cruise Control, which provides the benefits of standard cruise control with the ability to add speed and distance intervals, as well as automatically slowing the vehicle in slowing traffic to help provide a safe distance. When traffic flow ahead speeds up, Intelligent Cruise Control then reaccelerates to the preset speed and distance settings. Optional industry-first Distance Control Assist intuitively helps the driver release the throttle and apply the brakes as needed in slowing traffic. Another option, Forward Collision Warning uses the Intelligent Cruise system’s laser rangefinder to alert the driver of a potential collision, and if the driver does not respond, Brake Assist automatically engages the brakes to help reduce collision speed and impact. The Premium Package adds heated and cooled front seats, a power adjustable steering wheel, iPod integration system, folding outdoor mirrors, and aluminum paddle shifters to adjust the gears when using the manual shift mode.

All 2009 FX models came standard with Infiniti’s new 7-speed automatic transmission, which was also introduced on the 2009 G37 coupe.

All FX50 models ordered with the Sport package (FX50S) come equipped with Active Steering package. This package features a planetary gearset on the steering shaft (similar to BMW), that varies the steering ratio between 12.0:1 and 18.5:1. The package also includes a rear-wheel steering system that induces up to one degree of steer to the rear wheels, to provide increased handling response for the vehicle.